We’re on a mission to make a miracle every day. As a token of our appreciation for making 2011 an epic year, we’re giving away a high-quality 320Kbps MP3 download every day this month. That’s 30 days of unreleased Grateful Dead tracks from the vault, selected by tape archivist David Lemieux! Intrigued? We’re also going to put your knowledge to the test and give you the chance to win some sweet swag from the Dead.

You know your Ables from your Bakers from your C’s, but can your finely tuned ears differentiate the cosmic “comeback” tour from a spacey 70′s show? Each day we’ll post a free download from one of the Dead’s coveted shows. Will it be from that magical night at Madison Square Garden in ’93 or from way back when they were just starting to warm it up at Winterland? Is that Pigpen’s harmonica we hear? Brent on keys? Step right up and try your hand.

Guess the venue & date correctly and you’ll be automatically entered to win the prize of the day. Each day a winner will be selected at random, so take your time and make your best guess! Answer correctly, and you will also be automatically entered for our Grand Prize – an All Music Edition of Europe ’72: The Complete Recordings. What are you waiting for? Grab today’s download here. 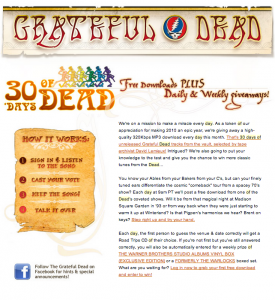 While it’s growingly impossible to define the ever-changing landscape of rock and pop, we can safely say what we do know it is – fashion, attitude, language, lifestyle and above all else – song. Rooted in 40s and 50s rhythm and blues and country, with cues from folk, jazz and classical music, rock and pop went electric and left both a massive wake and an open door. Today it’s omnipotent, taking on anything and everything.

Our dynamic collection of artists such as The Doors, Black Sabbath, The Monkees, Stone Temple Pilots, Chicago, The Ramones, continues to break stylistic boundaries and sonic barriers. 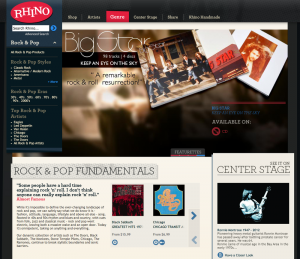 “If a song’s about something I’ve experienced or that could’ve happened to me it’s good. But if it’s alien to me, I couldn’t lend anything to it. Because that’s what soul is all about.” – Aretha Franklin

Building off street jazz and church gospel, the syncopated sounds of Rhythm & Blues could be heard far and wide in post-WWII African American communities – from the rural farms of the Mississippi Delta to the Windy City and everywhere in between. Fitted with flatted chords, storytelling and revelations, R&B gave way to poppier incarnations Funk, Doowop, and perhaps most importantly Soul, with it’s secular testifying, handclaps and call and response phenomenon.

At Rhino, King and Queen Of Soul Otis and Aretha set the pace, Curtis brought the funk, Ray made the rhythm jump and countless blues masters and girl groups paved the way for decades to come.

“The first time around you didn’t quite understand our new style of speak. (Don’t worry we can fix that right now)” – De La Soul from Plug Tunin’

In the 1970s urban youth put a unique twist on the African-American and West African traditions of talking blues and jazz poetry when they took to the streets with little more than rhythmic vocal style and a few simple backing beats. The evolution brought on a whole new culture complete with beat-boxes, turntables, samples and synthesizers but all a good freestyler needs is microphone.

We deliver to you the fast and furious lyrical stylings of forefathers Sugarhill Gang and Grandmaster Flash, the jazzy vibe (vibe) and rhythms of De La Soul, the undeniably smooth sounds of Digital Underground, ODB and more. 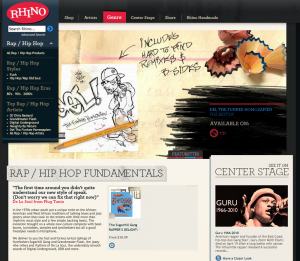 WRAPPED UP IN RHINO

Depending on when you opened this email (we know you’ve been bombarded with sales on everything from cashmere slippers to hickory smoked hams), you probably have about 18 days or 432 hours to get all your holiday shopping sorted. And if you are anything like us and can’t be arsed to battle it out at the mall, well then, you’ve probably got even less time to get it shipped, wrapped and slipped under the tree. We’re here to help. Shop the gift guide, check the timetable for “delivered by” dates, and you’ll get it all right on time. Easy breezy.

SHIPPING DEADLINES… PLACE YOUR ORDERS BY NOON, P.T. ON:

You’d have to be a total Scrooge not to love “When A Man Loves A Woman” or quite frankly any of the 100+ soulfully intimate songs on PERCY SLEDGE: THE KING OF COUNTRY SOUL, the first comprehensive collection of Sledge’s Atlantic Recordings spanning 1966-74. The four-disc boxed set, spotlighting studio and live recordings, rare and unreleased tracks, ships the third week of December but you can pre-order it now.

HANDMADE’S ON THE RIDE TO NOWHERE

Pick out the perfect pair of Chucks because shoe-gazing is back! The sonic swirl of Oxfordshire quartet Ride’s debut album just hit its 20th anniversary and instead of celebrating with china, we’re celebrating with – you guessed it – the two-disc NOWHERE: 20TH ANNIVERSARY EDITION. This 5″ x 5″ hardback package features a newly remastered U.S. version of NOWHERE, the EP TODAY FOREVER, an unreleased live show, and a 40-page booklet with rare photos and an essay by author Jim DeRogatis. Plus we’re releasing the original 8-song U.K. album for the first time ever in the U.S. on 180-gram vinyl. Pre-order the 2-CD set and vinyl now. Ships the third week of December.

It may not be warm in Chicago right now, but the sun was sure shining bright when Eric Clapton gathered up the world’s most talented guitar players for the CROSSROADS GUITAR FESTIVAL 2010. Slip a little sunshine into your favorite virtuoso’s stocking on DVD or BLU-RAY and you’ll get a gift of your own – an exclusive sampler featuring 6 audio tracks from the festival. Hurry, we’ve only got a few left…

THE DOORS LIVE IN VANCOUVER 1970

Jim, John, Robby, and Ray light up the Great White North with this previously unreleased 1970 concert featuring a special guest appearance by blues legend Albert King. The two-disc set, which captures the band blazing through revved up renditions of “Roadhouse Blues” and “Alabama Song (Whisky Bar)” and classic blues covers like “Little Red Rooster” and “Who Do You Love,” is available now. Get it here.

If you were doing word association, you probably wouldn’t hear Christmas and think Los Angeles. Unless of course the Grammy-nominated four-disc, 101-track boxed set WHERE THE ACTION IS! LOS ANGELES NUGGETS 1965-68 was our “12 Days of Rhino” deal of the day  - today only – at 40% off. Get it now. And stay tuned – we’ve got 5 more days to countdown!

Who’s got time for taxidermy? Leave that to the ski lodge and plaster your walls with a couple of these fierce Rhino-approved, vegetarian-friendly wall trophies.

Bring on the blues AND the bass. Little known fact – you could get lost in blizzard and they’d still be able to find you with this cheerful bright blue 100% cotton tote bag.

SPIN THESE RIGHT ROUND THE X-MAS TREE…

LIGHT A FIRE FOR THE DOORS

Deck your turntables with the undeniable heat of The Doors’ self-titled debut in magical mono. This 12″ reissue on 180-gram HQ virgin vinyl presents the original 1967 mono mixes of quintessential favorites like “Light My Fire,” plus “Break On Through,” “The Crystal Ship,” and “The End.”

AMPED UP ON CANDY CANES AND VAN HALEN

Hooray for Spandex and Frankenstrats! Whether you are naughty or nice, Van Halen on 180-gram vinyl spells Christmas party fun, fun, fun. 1984, VAN HALEN II, and WOMEN AND CHILDREN FIRST are now available for pre-order. Select RUSH or OVERNIGHT shipping to ensure delivery in time for Christmas.

VISIONS OF TOM WAITS DANCED IN THEIR HEADS

“Twas The Night Before Christmas” these noir tales are not. We’re proud to present the grit and the grime of Tom Waits’ acclaimed Asylum albums – CLOSING TIME, THE HEART OF SATURDAY NIGHT, NIGHTHAWKS AT THE DINER and SMALL CHANGE – on 180-gram vinyl and packaged with their original artwork. Pre-order ‘em and select RUSH or OVERNIGHT shipping to ensure delivery in time for Christmas.

ALBUM OF THE WEEK’s CRAZY FOR CHRISTMAS

Cozy up with Keith as he delivers nine smooth Christmas classics sure to light any fire. A CHRISTMAS OF LOVE is just $4.99 MP3 and $6.25 Hi-Def Lossless. Check back each Monday this month for more holiday faves from Arthur Lyman and Al Jarreau.

Perhaps warm and fuzzy means out the box and off the beaten path to you? Follow this month’s fearless “Staff Picks” leader for swirling harmonies,’80s Yacht Rock, tribal surf and the quirky stylings of Biz Markie and Van Dyke Parks.

You probably expect to hear a little Sinatra, Aretha, and Peter, Paul, & Mary around the holidays. Maybe even The Monkees. But what about The Ramones, David Lee Roth, and ZZ Top? Go caroling with our classic Rhino Christmas channel. 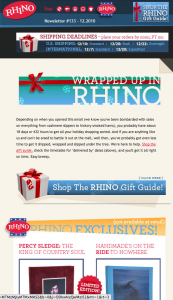