The Grateful Dead may have wrapped up the final show of the first leg of their 1978 Spring Tour in a town called Normal, but this night was anything but! Yes, on this fine evening, the Rhythm Devils shook the room with an exotic tribal assault. Bob found his groove with the slide guitar, contrasting nicely with Keith’s block chording, Phil’s thundering and swooping bass-lines, Jerry’s articulated leads. Heck, they even dabbled in disco, teasing the audience with an unmistakable riff from “Stayin’ Alive.” What does all this juiced-up, cranked to the max, sonic savagery add up to? Top-level deliveries of fan favorites like “The Music Never Stopped,” “Scarlet Begonias>Fire On The Mountain,” and “Ramble On Rose,” a jungle-vibed 14+ minute Rhythm Devils interlude, an over-the-top take on Warren Zevon’s “Werewolves of London” and much, much more.

Limited to 13,000 individually numbered copies, this super-charged 3-CD set featuring the complete show from 4/24/78, ships August 1st, but you can pre-order it now.

Great fog horns! David Lemieux moves his production to the Golden Gate Bridge for this edition of the Seaside Chat. Find out why Dave’s Picks Volume 7: Horton Field House, Illinois State, Normal, IL carries on the spirit of ’77 here.

Tune in to what is widely considered one of the best-ever renditions of “The Music Never Stopped.”

Yea, we really did just say that. If you’ve got a problem with it, then we can pretty much guarantee you’re going to miss out on all the kick-ass offerings we have from the world’s greatest rock band. (Yep, we said that too.) If you’re smart and know what’s good for you, you’ll pick up the must-have LED ZEPPELIN 4-CD boxed set for just $35.99 (that’s 50% off) now thru 9/30. Head on over to our digital shop where you can upgrade your Led Zeppelin collection with Hi-Def downloads. Maybe even fill in the gaps with Robert Plant solo albums on CD and vinyl or explore Page’s one-time side project The Firm.

And now we will attempt to boldly go where we have never gone before. We’re giving you not one, not two videos, but a whole channel full of Led Zeppelin! No 3-D glasses necessary. Just sit back, relax and enjoy the best of what 70s video technology has to offer with your own two eyes.

HANDMADE’S IN THE STATE OF HILARITY!

You know what’s not funny? The fact that you had to wait 14 years for this damn CD. Well, it is finally here and we can confirm that all 25 tracks of The State’s COMEDY FOR GRACIOUS LIVING will have you doubled over and wondering why the hell it took so long. It ships out mid-September, but you can pre-order it now. And of course, you can only get it at Rhino.com.

We’re not big on gambling but we can predict that Tony Joe White’s THAT ON THE ROAD LOOK “LIVE” will be the second coming of swamp rock. This little gem, plucked from obscurity way back in 1971, is packed with 13 womper-stomper ditties including a ten-minute rave-up “Polk Salad Annie” and a classic cover of T. Bone Walker’s “Stormy Monday.” And you don’t have to wait any longer to get it, ’cause it’s now shipping.

OK, holdouts! We know the score. Y’all wanna know what’s inside, right? Check out our super high-tech video that explores the glorious innards of this handsome lil’ road case. Behold the wonders of DELANEY & BONNIE & FRIENDS – ON TOUR WITH ERIC CLAPTON.

THE COWBOYS FROM HELL RIDE AGAIN

Ain’t tellin’ no tall tales friend – Pantera’s landmark album, COWBOYS FROM HELL, is now available for pre-order in 3CD Deluxe and 2CD Expanded editions! Both releases feature the newly re-mastered original album plus unreleased and rare live performances from the “Cowboys From Hell” Tour. Double down for the DELUXE EDITION and you’ll get a full disc of demos including the never-before-released track, “The Will To Survive.”

The only thing better than a five-LP boxed set of the Dead’s best studio recordings on 180-gram vinyl is a box that also includes an exclusive reproduction of a rare Dark Star 7″ AND an exclusive reproduction of a rare 1967 promotional poster AND FREE SHIPPING. Did you see all those “ands”? All those extras are Dead.net exclusives. And you can have ‘em when you pick up the WARNER BROS STUDIO ALBUMS BOX from Dead.net.

THE BEST OF GERALD LEVERT

Rhino pays tribute to Grammy®-winning singer Gerald Levert with THE BEST OF GERALD LEVERT, a collection of his greatest work, including the previously unreleased “Can It Stay.” Out now, the 16-song set features the smash hits “Cassanova,” “Baby Hold On To Me,” and “My Body,” and is the first to span Levert’s entire extraordinary career.

Rebirth. Reincarnation. Call it what you will. There’s no denying the influence the iconic art of the ’60s has in the digital age with the launch of our new sister site FamilyDog.com. The movement’s free spirit and artistic experimentation has been preserved in a fine selection of high quality lithographs, authentic fine jersey t-shirts, surrealistic pillows (literal ones!), and more. Go on child, dabble in the Dog.

OUR RHINO IS YOUR RHINO

In case you’ve forgotten, we’re in America. Land of baseball, apple pie, and freedom of expression. And like you, we’ve got opinions. Boy, do we have opinions. Everywhere you turn around here it’s 60s vs. 70s (vs. 80s!), death metal vs. hair metal vs. speed metal, Joy Division vs. New Order. So we thought we’d share with you a few of our staff’s favorite finds which just might inspire you to scream, cheer, or pout about your picks (or ours) on our message boards. 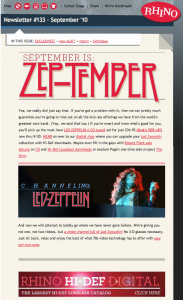