From Ted Cruz giving his best Darth Vader to Trump’s litany of quotables to Hillary’s budding interest in Snapchat’s disappearing messages, the 2016 campaign trail is serving up more than the usual amount of fodder – and funny – and that’s just from the candidates alone.

This June, Politicon will be toasting to a second term as the quintessential non-partisan event of the year. In honor of the impending presidential election, we’re upping the ante with some of the biggest names in politics and the wittiest voices in comedy and entertainment, representing all sides of the political spectrum.

With 12 rooms ranging from 50-seaters to large-scale auditoriums, you’ll be able to get up close and personal with political heavyweights, revel in the endless humor with the likes of James Carville and Sarah Palin, dissect documentaries and parodies with filmmakers, and maybe even interact with a few of history’s greatest leaders.

NOW’S YOUR CHANCE TO ENTERTAIN DEMOCRACY! 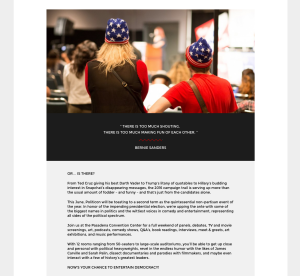