The Grateful Dead may have wrapped up the final show of the first leg of their 1978 Spring Tour in a town called Normal, but this night was anything but! Yes, on this fine evening, the Rhythm Devils shook the room with an exotic tribal assault. Bob found his groove with the slide guitar, contrasting nicely with Keith’s block chording, Phil’s thundering and swooping bass-lines, Jerry’s articulated leads. Heck, they even dabbled in disco, teasing the audience with an unmistakable riff from “Stayin’ Alive.” What does all this juiced-up, cranked to the max, sonic savagery add up to? Top-level deliveries of fan favorites like “The Music Never Stopped,” “Scarlet Begonias>Fire On The Mountain,” and “Ramble On Rose,” a jungle-vibed 14+ minute Rhythm Devils interlude, an over-the-top take on Warren Zevon’s “Werewolves of London” and much, much more.

Limited to 13,000 individually numbered copies, this super-charged 3-CD set featuring the complete show from 4/24/78, ships August 1st, but you can pre-order it now.

Great fog horns! David Lemieux moves his production to the Golden Gate Bridge for this edition of the Seaside Chat. Find out why Dave’s Picks Volume 7: Horton Field House, Illinois State, Normal, IL carries on the spirit of ’77 here.

Tune in to what is widely considered one of the best-ever renditions of “The Music Never Stopped.” 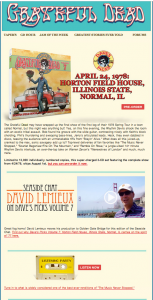