In 1982, the curious coupling of a rock’n’roll purist and a consummate literate would result in an unmistakable sound that would forever be engrained in the minds of their friends and foes. With synthesizers and mind-numbing excess on rise, The Smiths took the road less traveled, challenging people with outspoken lyrics and taunting guitars. They called upon the wayward, the forlorn, the just plain ordinary, plied them with poetry and politics, controversy and cynicism – and in that, gave every man a voice. These effects would be felt long after their dissolution, spawning musically, a monster called Brit-pop and lyrically, an army of unwavering fans who would gladly die by their side.

After several years playing in unsuccessful bands on the Manchester circuit, a chance meeting through mutual friends proved serendipitous for Steven Patrick Morrissey and Johnny Marr. They quickly found common ground in their love of pop culture and their incessant need make their own mark on it. The pair took to the studio, writing and recording demos with the Fall’s drummer, Simon Wolstencroft. Shortly thereafter they settled on the name The Smiths, chosen because it was commonplace, and recruited Marr’s schoolmate Andy Rourke to play bass and Mike Joyce to play drums.

Their first single, a one-off on Rough Trade entitled “Hand In Glove,” with its loosely veiled references to homosexuality, made waves on the independent charts and in the press. The public’s interest was further fueled by Morrissey’s unusual antics – on stage, a spectacle with his pocketful of gladioli and his hearing aid, off stage a soapbox with his public declarations of celibacy, vegetarianism, disgust for the country, the government, his peers, anything really. In fact, by the time The Smiths released their second single “This Charming Man,” (later issued on their eponymous debut), they had already been in the spotlight over “Reel Around the Fountain,” a song that seemed to some to condone pedophilia. Misinterpretation would become a recurring theme and Morrissey would do little to dispel it.  After all controversy raised interest in the group. “This Charming Man” hit 25 on the chart; its subsequent single “What Difference Does It Make” climbed steadily to #12 and in turn, The Smiths would break at #2 on the album charts.

Empowered by the media attention and overnight popularity, Morrissey and Marr began churning out unforgettable singles. “Heaven Knows I’m Miserable Now,” released in 1984, would become their highest-charting single at #10. It sparked yet another media storm with its B-side, “Suffer Little Children,” an ode to the victims of the notorious Moors Murders that was first mistaken as glamorizing the murders. Later that year, based on the success of non-LP single “William It Was Really Nothing” and B-side “How Soon Is Now,” The Smiths would release Hatful Of Hollow, a collection of B-sides, BBC sessions and non-LP singles.

Meat Is Murder, the band’s second proper studio album, entered the British charts at number one in February of 1985. Haunting and melancholic at times, rambunctious and angst ridden at others, it failed to produce any hit singles. It did, however, stand out for Marr’s exceedingly experimental guitar work, a dizzying and layered symphony of chords, and for Morrissey’s escalating tirade against the monarchy, Thatcherism and his colleagues.

Their third album, The Queen Is Dead, issued in 1986, once again reached the top of the charts, securing #2 in the U.K. and breaking through the top 100 in U.S. On it, Morrissey articulates more clearly, more cleverly, oscillating between the satiric  (“Bigmouth Strikes Again”) and the heart-wrenching (“There Is A Light That Never Goes Out”), Marr’s guitars follow rapturous and shimmering.

The Smiths seemed to be at the pinnacle of their career with the release of their singles/B-sides compilation The World Won’t Listen (Louder Than Bombs in U.S.). But Morrissey and Marr were beginning to think differently about the future of the band, not to mention that Marr suffered injuries from a near fatal car crash and Rourke was grappling with a heroin addiction. Just weeks before the fall release of Strangeways, Here We Come, Marr would announce his decision to leave the band. The record, while fuller in production, its rounder feel due in part to more input from Rourke and Joyce, captures a feeling of forging ahead while falling apart. It’s apparent the end is near, as evident in the bleak and orchestral, perhaps symbolic, final single “Last Night I Dreamt That Somebody Loved Me.”

Morrissey embarked on a solo career, enlisting Rourke and Joyce to play on many of the albums to follow.  He tours steadily today. Marr went on to perform with a variety of artists, forming Electronic with New Order frontman Bernard Sumner in  1989, and most recently becoming an official member Modest Mouse. Rourke soon vowed to retire from recording and Joyce joined the reunited Buzzcocks in 1991. That same year Joyce and Rourke sued Morrissey and Marr, claiming they received only ten percent of the group’s earnings while the songwriters received the lion’s share. Rourke eventually settled out of court, but Joyce won his case in late 1996. 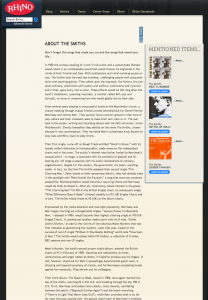